Mould is a type of fungus that will grow in many situations that have a least some moisture. There are actually many different types of mould, and most dust and air contains spores of at least a few kinds. The spores will settle and grow in any suitable situation. It is common to see mould on aging food or in damp indoor areas.

Mould can be a health issue. Some individuals have an allergic reaction to mould or the mould spores; that often cause problems for asthmatics. Some less common moulds are harmful to all people. Symptoms of mould problems include dry, red eyes, coughing, breathing problems, constant tiredness, and cognitive problems.

Mould can be more of a problem in the kitchen than in most other rooms because of the combination of moisture, stored food and undisposed rubbish. This mould may go unnoticed.

Mildew is another type of fungus. It is distinguished from mould because of its white colour, its need of organic material to consume and more specific growing conditions (higher temperatures and the right moisture level).
Mildew can be dealt with in the same way as mould.

Dealing with mould and mildew

Our peel and stick tiles are made from materials that resist mould and mildew. If combined with mould resistant painted surfaces the kitchen can be virtually mould and mildew free. 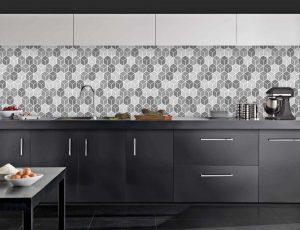